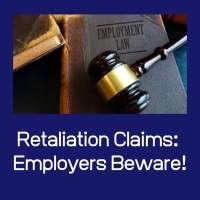 In this case, Harrison-Harper v. Nike Inc., d/b/a Converse, Inc., the employee (Harrison-Harper), a store manager at a Converse Store, argued that she had been terminated by her employer, Nike, in retaliation for a complaint she made to her district manager, Sanders, on October 7, 2015, about another employee “talking about [her] in a sexually suggestive way” and ‘’making up lies about [her].”  Her termination occurred three weeks after her complaint. Her district manager believed that Harrison-Harper’s complaint did not warrant further investigation and he did not consider the complaint to be about “harassment on the basis of gender or sexual orientation”.  He therefore did not pass the complaint on to his superiors.

Harper-Harrison appealed the District Court’s dismissal of her retaliation claim brought under Title VII of the Civil Rights Act of 1964 and the Pennsylvania Human Relations Act.

On appeal, the Court of Appeals listed the elements an employee must ultimately establish to prove a retaliation claim absent direct evidence:

Element  no. 2-material adverse action- was also not an issue in this case: Harper-Harrison was terminated from her job.

The issue before the Court was therefore whether or not there could be said to be a causal connection between the protected activity (i.e. making a complaint about harassment) and job termination.

Also of significance was that three out of the four decision makers regarding Harper-Harrison‘s termination had no knowledge of her allegations of harassment.

Thus, despite the short time span between her complaint and her termination, the Court affirmed the District Court’s dismissal of Harper-Harrison‘s complaint.

Importantly, “protected activity” (not an issue in Harrison-Harper) can involve a wide range of conduct in addition to making a complaint about harassment to the employer or filing a formal complaint with an enforcement agency or a court.

Examples by the  EEOC on its website include: 1) being a witness in an employment discrimination or retaliation case; 2) “answering questions during an employer’s investigation of alleged harassment”; 3)”refusing to follow orders that would result in discrimination”; 4) ”resisting sexual advances, or intervening to protect others”;  5) ”requesting accommodation of a disability or for a religious practice”; 6) ”asking managers or co-workers about salary information to uncover potentially discriminatory wages”.

In addition, although the question of whether the employer had taken a “material adverse action” against the employee was also not an issue in this case (because the employee had been terminated), this issue can easily be present in situations where the employee is not actually terminated. Besides termination, material adverse action could include, among other conduct, reprimands, unfair job evaluations, transfers, excessive surveillance and scrutiny (e.g., tracking an employee’s coming and goings to a bathroom), unfair scheduling, and verbal or physical abuse.

The United States Supreme Court, in Burlington N. & Santa Fe Ry. Co. v. White, has made it clear that the standards for proving retaliation are considerably less demanding than for proving employment discrimination. With respect to discrimination claims, an employee has to prove conduct that “affects[s] the terms and conditions of employment”.  By contrast, to establish a retaliation claim, an employee only has to show “that a reasonable employee would have found the challenged action materially adverse, which in this context means it well might have dissuaded a reasonable worker from making or supporting a charge of discrimination.”

Given the wide range of conduct that could constitute protected activity, and the equally broad range of conduct that could constitute retaliation, it is hardly surprising that retaliation claims have been the most frequently filed with the EEOC. The employer in Harrison-Harper, however, was able to successfully defend the claim because it could show that complaints about the employee’s performance had been made prior to the employee’s harassment complaint.

Without this documentation and documentation as to conversations with the employee, the short interval between the employee’s harassment complaint and her termination could have been construed as “unusually suggestive” of retaliation. With this documentation, Nike was able to show that it had a legitimate, nonretaliatory reason for terminating Harrison-Harper and thus the Court dismissed her complaint. The lessons for an employer are clear: in addition to conducting regular written employee evaluations, an employer must  document  contemporaneously events and conversations as workplace issues  arise with respect to a particular employee-including complaints by an employee or complaints about an employee.

More in this category: « Medical Marijuana and Child Custody Cases in Pennsylvania From a Litigator's Desk: Sometimes the best thing to do is… nothing. »