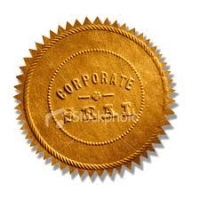 From time to time, a client asks about when and why a corporate seal is necessary. Even some attorneys (particularly from out of state) question during contract negotiations whether the phrase “executed under seal” should be removed from a contract as an archaic concept. Historically, seals were affixed to a document as a formality to attest to the parties’ intention to be legally bound by the promises contained in the document. In several states, however, the execution of an agreement under seal continues to have specific legal significance that is not always understood or intended by the parties.

As a general rule, the Pennsylvania Judicial Code provides that the statute of limitations for actions based on a contract is four years. For instruments that are executed under seal, however, the statute of limitations is twenty years. The guarantor of a commercial loan recently learned the hard way that his guaranty was subject to the extended statute of limitations. In Osprey Portfolio, LLC v. Izett, the lender confessed judgment under Mr. Izett’s guaranty nearly five years after the loan went into default. Mr. Izett argued that the action was precluded because it was filed after the four-year limitation period. While acknowledging that the document was executed “under seal”, Mr. Izett maintained that the twenty-year limitation period did not apply because the guaranty agreement was not an “instrument”, which he defined as instruments under Article 3 of the Uniform Commercial Code. Article 3 defines “instrument” as a “negotiable instrument”, namely “an unconditional promise to pay a fixed amount of money.” Because his guaranty related to a line of credit (not a loan for a fixed sum) and was conditional upon the default of the borrower under the note, he reasoned that it did not meet this definition of “instrument.” The Pennsylvania Supreme Court disagreed and affirmed the lower courts’ rulings. It held that the term “instrument”, as used in the Judicial Code,  should be interpreted using its ordinary meaning: a written document that defines the rights and obligations of the parties, such as a contract, will, promissory note, etc. Using this broader definition, the guaranty in question clearly qualifies as an instrument. Since the instrument was executed under seal, the twenty-year statute of limitations applied and the action was allowed to go forward.

It should be noted that the Judicial Code section providing for the twenty-year statute of limitations is due to expire on June 27, 2018. Of course, the sunset date for this provision has been extended in the past, so only time will tell whether the execution of contracts and other writings “under seal” will continue to have special legal significance in Pennsylvania.