Litigation in a Coronavirus Environment 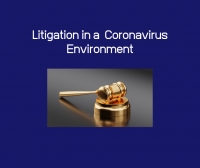 As the coronavirus pandemic extends its grip across the Commonwealth of Pennsylvania, its effects are felt throughout the practice of law.  The very nature of litigation, the need for witness testimony, advocacy and argument before a tribunal, judge or jury necessarily implicates close personal contact.  While measures to preserve the status quo are certainly necessary, the impact on pending litigation as well as potential new litigation, is developing.

The first cases of coronavirus in the Commonwealth were announced on March 6, 2020. In response to Governor Wolf’s declarations against public gatherings of any kind and suspension of non-essential businesses in Montgomery County, President Judge DelRicci sought authority from the Supreme Court of Pennsylvania to suspend most court operations based on emergency powers vested by Rule in the President Judges of the various districts in the Commonwealth.  President Judge Wallace Bateman of the Bucks County Court of Common Pleas made a similar request only days later.  Obviously, both requests were granted and Orders were entered pertaining to the respective Courts of Common Pleas.  Thereafter, at the urging of the Commonwealth Secretary of Health, and in light of the Federal Government’s push for further measures, the Supreme Court of Pennsylvania on March 18, 2020 stepped in to relieve the various county president judges from the obligation to seek authority from the Supreme Court and, based on the Supreme Court’s own authority, entered an Order effectively suspending most court operations statewide in all jurisdictions.  Deadlines for filing papers required by Rules of Civil Procedure are extended, court appearances cancelled, evictions halted and many aspects of court operation are suspended.

Clearly, the Orders of the Courts of Common Pleas and the Pennsylvania Supreme Court are intended to preserve the status quo while the effort to thwart the spread of the contagion expands.  As noted by the Supreme Court, court appearances by definition bring people into exactly the type of close contact situations which medical experts have determined are to be avoided.  But litigation need not grind to a halt – at least not in most circumstances.  While certain provisions of the Orders preclude further action on service by the various sheriffs’ offices and preclude orders of possession in landlord tenant matters, no provision of any of the Orders entered in our area precludes the filing of a motion in a pending matter or an appropriate response to a pending motion.  Deadlines are extended but action remains permitted.  Of course, subject to a few notable exceptions, no personal appearances are contemplated.  Today, most court filings are made remotely using electronic filing systems.  A check on the electronic filing system implemented by the Bucks County Court of Common Pleas indicates that the system is up and running as of the date of this writing.  Cases can still be settled, agreements can still be negotiated and mutual understandings can still be memorialized.

While the effects of the Orders issued by the Courts of Common Pleas and the Supreme Court are relatively clear with respect to pending matters, no guidance is offered with respect to the commencement of new matters.  No provision of the Supreme Court’s Order specifically addresses the statute of limitations.  As the statute of limitations is a legislative creation, not part of the Rules of Civil Procedure, the Courts may simply lack the authority to modify them.  Certainly, while Courts control the application of the statute, service of process and reinstatement of writs and summonses, thus all matters after the initial filing, it appears the timely initial filing remains required.  None of the Orders appear to address the court administrative functions related to the commencement of actions.  In jurisdictions where litigation can be commenced electronically through an electronic filing system (which does not include all jurisdictions within the Commonwealth or all types of matters) there is argument that tolling of the statute of limitations is not warranted.

We continue to monitor the communications, directives and administrative Orders issued by the Courts of the Commonwealth, the State of New Jersey and the Federal Courts.  We expect continued communication throughout this evolving situation and these trying times.