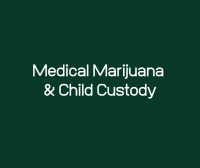 In Pennsylvania, the paramount concern in a child custody proceeding is the best interest of the child. In determining the best interest of the child, courts engage in a comprehensive analysis of the factors outlined in 23 Pa.C.S.A. § 5328.  Pennsylvania Health and Safety Statute §10231.2013 states that the use of medical marijuana in accordance with state laws is not a consideration by itself in a custody case. The custody laws have not been amended to address the issue or make similar limitations regarding the use of medical marijuana by a parent.

On December 18, 2019, however, the Superior Court of Pennsylvania issued an opinion affirming an April 5, 2019 Schuylkill County Court of Common Pleas decision limiting self-represented Father’s contact with son, age 10, to periods of supervised physical custody. The case involves a child born in May of 2009 to Mother and Father, both who have struggled with substance abuse. The court noted that Father’s recreational use of marijuana has been a recurring issue throughout the custody litigation. Father obtained a medical marijuana license when the parties were living in Georgia. At the time of the hearing, the child’s maternal grandparents had primary physical custody of the child. The trial court had awarded maternal grandparents primary physical custody of the child adding a provision that conditionally extinguished Father’s supervised custodial time “upon Father’s willingness to demonstrate sobriety and continued abstinence.”

Father argued that in light of his license to use medical marijuana as a mechanism to manage his wrist pain, the trial court should not weigh the fact of his medical use against him. The trial court rejected Father’s argument and reinstated the prior custody arrangement and the hair-follicle-testing condition. The trial court reasoned that it is unknown to the Court what effect, if any, Father’s alleged medical condition and use of marijuana, whether prescribed or used recreationally, may have on his ability to care for a child. Father appealed, and the Pennsylvania Superior Court affirmed the trial court’s decision.

The Superior Court noted that the Medical Marijuana Act prohibits the fact-finder from penalizing a parent simply for using medical marijuana. However, in the instant case, the trial court concluded after a consideration of all of the best-interest factors and the evidence presented, that it was not in the child’s best interests to expand Father’s supervised partial custody to unsupervised overnight custody without requiring Father to continue to submit to the previously-ordered drug screening regimen. The Medical Marijuana Act does not preclude the court from making relevant findings concerning effective marijuana use, medical or recreational, on parent’s ability to care for a child. The Superior Court noted that the fact finder should consider not only the parent’s history of drug and alcohol use, but also the parent’s mental health and physical condition that might require the parent to rely on prescribed medication to subdue that pain. The Court concluded that a parent’s history of drug and alcohol abuse, including a parent’s legal use of any substance, should be considered in determining the child’s best interest.